Ram Navami, sometimes referred to as Ram Navami or Sri Rama Navami is a Hindu festival that commemorates the birth of Lord Rama. The holiday is observed across India in all the states and union territories.

Who is Ram Navami?

Rama was born in the town of Ayodhya as the son of King Dasharatha. He was dark-complexioned in a colour that looked bluish. According to a legend, the king had several wives but no children to take up his emperor after his death. One day, the king asked the great Rishi to perform the ritual of Puthra Kamesti Yagna to help him get a child. Miraculously, this worked, and his first son was born. He named him Rama. Rama is believed to be the 7th incarnation of Lord Vishnu and, therefore, one of the Hindu deities. Hindus consider Rama as a religious hero in the Ramayan epic detailing the journey of Rama saving his wife who had been abducted by the demon king Ravana of Lanka.

When is Ram Navami?

The holiday is marked in the month of Chaitra on the ninth day. As per the Gregorian calendar, the dates fall between late March and early April. Ram Navami 2021 will be marked on Wednesday, 21st April.

Is Ram Navami a public holiday?

Ram Navami is a gazetted public holiday in all the Indian states and union territories.

What is open or closed on Ram Navami

Ram Navami is a day off to the general population, and therefore government offices, schools, banks, post offices, and many businesses remain closed for the day. The few that open on this day operate on reduced hours from the norm.

Things to do on Ram Navami?

Celebrations of Rama often start nine days earlier. As a devotee of Rama, you will need to clean your house and decorate it with small Rama statues. You can also place flowers and fruits on the shrine before reciting your prayers.

It is common for people to organize bhajan and kirtans in their homes or religious sites dedicated to Rama. It is also important to visit the temple and seek blessings. While at the temple, you can witness the Havana fire ritual, which aims at purifying the body, mind, and soul.

During Ram Navami, you need to fast the entire day until midnight and only break the fast by consuming sweets and fruits. It is common for devotees to avoid particular foods such as wheat products, garlic, and onions.

At the birth town of Rama, Ayodhya, street processions are held, which you can attend. Miniature statues of Lord Rama are placed on a cradle and carried across the streets.

You can also take a friend out and watch open-air staged plays portraying how Lord Rama defeated the demon Ravana in pursuit of his wife, Sati.

Depending on the part of India that you are in, you might be lucky to witness a popular game played by youngsters. Ideally, an earthen pot full of money is hung on a tree, and some youth form pyramids in the quest to reach it. As the teams work hard to get the money, the onlookers usually shoot water jets as a distraction and hence making the ground too muddy and thus challenging. The game is very similar to the one that takes place during the Janmashtami festival. 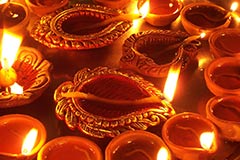 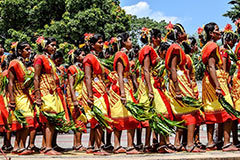 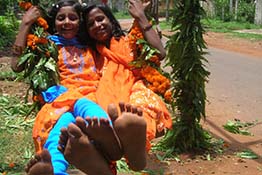