Durga, also known as Durgostava, is the Hindu religious festival that honours Goddess Durga. The festival is seen as a symbol of power and triumph of good over evil. It commemorates the victory of the ten-armed mother goddess Durga over the evil demon Mahishasura. Other than Durga Puja, other deities like Lakshmi, Karthik, Ganesha, and Saraswathi are also worshipped.

When is Durga Puja?

Durga Puja is usually a 4-day long festival with rituals happening at every stage. The most important is the last day, Vijaya Dashami, celebrated nationally. Durga Puja is observed during the month of Ashwin as per the Hindu calendar. The month coincides with September or October of the Gregorian calendar. Durga Puja 2020 will be marked on 23rd October.

Is Durga Puja a public holiday?

Durga Puja is a public holiday in India and, therefore, a day off to the general population. Durga Puja is mostly popular in the southern states of India and a few places in Northern India.

What is open or closed on Durga Puja?

Government offices, banks, post offices, schools, organisations and the majority of businesses are closed on Durga Puja. Public transport is not majorly affected as people still move around for religious activities. However, there is likely to be heavy traffic due to parades and marches in major towns and cities.

Things to do on Durga Puja

Durga Puja mostly involves fasting, feasting, and worshipping Goddess Durga. The festival is associated with a variety of activities for all the devotees across India.

The main festival usually takes place in Kolkata. The Durga Puja in Kolkata is celebrated by Hindus and non-Hindus who participate in dancing and other dramatic performances. By taking part in this festival, you will also enjoy Bengali cuisines such as kichudi, bhaja, labda, and papad.

Moreover, you get a chance to visit the numerous Bengal streets stalls where you can buy cultural souvenirs and beautifully painted clay made Durga idols.

In Delhi or Mumbai, you can attend a similar festival at Chittaranjan Park or Shivaji Park, respectively. The streets are usually decorated with colourful lights to capture the festive mood of the holiday. Food stalls along streets take the opportunity to sell traditional dishes to ensure that devotees do not go hungry. Due to the huge crowds, security is heightened, and police personnel deployed to assist in traffic control.

Durga Puja is a time to set up the pandals in your home or the temple with décor and art. A Durga Puja pandal is a sacred place where the idol of the goddess Durga is kept. Pandal contests are also organized where every participant aims at setting up a pandal that tells a story.

According to a legend, the world was under the threat of the evil demon buffalo Mahishasura. It is believed that no god, man or woman could defeat him. However, Durga Puja emerged with her energies of all the gods. Each of her arms carried the deadliest weapon from each god, and with that, he fought and defeated the demon. Durga Puja is said to have been the mother to the four gods: Lakshmi, Ganesha, Saraswati, Kartikeya.

Which are the key days of Durga Puja?

Durga Puja is observed with rituals lasting 10 days. However, only four days are considered the most important.

Malaya is the first day of the Durga Puja festival. It is believed that goddess Durga Puja came to earth on this day, and therefore, people decorate their homes with crafted statues to commemorate his descend to the world.

The seventh day of Durga Puja is Maha Saptami, when it is believed that the goddess started her battle with Mahishasura.

On Durgashtami, the eighth day of the Durga Puja festival, devotees often lay the weapons that goddess Durga used on the streets. This day is observed very vital with most people fasting and spending the day in the temples.

The last and the tenth day of Durga Puja is known as Vijaya Dashami. On this day, Goddess Durga appeared to demon Mahishasura riding on a lion and ready to slay him. Devotees parade statues of Durga on the streets before immersing them in water. 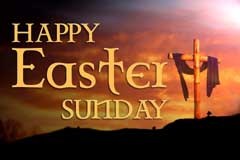 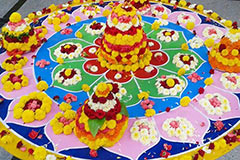 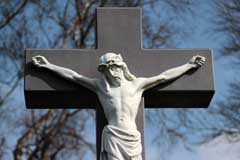 Traditionally, Good Friday is a Christian holiday commemorating the day Jesus Christ was crucified on the cross under t....